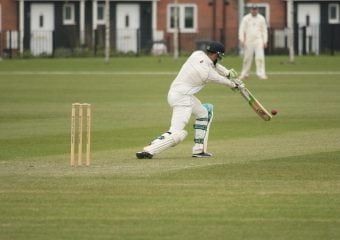 The final of the World Cup for the second most popular sport in the world is played on Sunday in Melbourne. In France, indifference is total.

Cricket has never really crossed the Channel. Perhaps because of its complex rules, perhaps because of its image as an aristocratic sport only played by English lords. As the final of its eleventh World Cup takes place – this Sunday in Melbourne, the two organizing teams, New Zealand and Australia, face off – it might be time to get excited about cricket, the sport with a billion fans. There are plenty of reasons.

1] France is the reigning Olympic vice-champion

Vincennes Velodrome, 1900 Olympic Games. The first cricket match in the history of the Olympic Games sees teams from France and the United Kingdom compete against each other. It will be the only one. The British won quite a lot. The France team was then made up of an assembly of English players on a goguette in Paris, while the United Kingdom team was made up of amateurs only. Participants who do not even know that they are playing an Olympic match there: the meeting will indeed be officially recognized as an Olympic final twelve years later. After these two days of match, cricket left the Olympics. A return to 2024 cannot be ruled out, however.

2] It is the sport of all sports

The origins of modern cricket back to the XVIII th century. It was at this time that the game was codified, regulated and that clubs were set up. “This representation at club level will also inspire all other sports thereafter,” reveals Sébastien Darbon, anthropologist at the CNRS specializing in sport. Cricket is the foundation of so-called modern sports. ” Clubs which can also be of considerable importance: the Marylebone Cricket Club, based in London, was until 1993 the governing body of cricket, and still holds the rights to the laws of the sport. A bit as if PSG had the power to change the rules of football.

3] The rules are ultimately not that complicated

In summary, two teams of 11 players take turns competing. One beats first (the order is decided by a coin toss at the start of the match): the goal of each batter is to score as many points as possible without being eliminated. There are several solutions for this: the first is to send the ball far enough to be able to run and cross the pitch, a strip 20 meters long in the middle of the field. Each time he arrives at the other end, the batter scores a point (“run”). The other way to score points is to kick the ball out of the field, a sort of home run that is worth six points (four points if the ball hits the field before going out).

During this time, the opposing team tries to eliminate the batsmen as quickly as possible. There are several ways here too: the thrower can try to hit the wicket, the three stakes posted behind the batter, or the other players can catch the ball before it hits the ground after it has been beaten. Once the ten batsmen of a team have been eliminated, the round is over. The other team beats and must then try to exceed the number of points of the first team. Depending on the match format, there may be one or two rounds per team, the game may end after a certain duration or a certain number of throws. All this is decided in advance, between gentlemen.

And if you’re more of a visual artist, some Quebec high school students summed it up in a tutorial:

4] It is, it seems, the “second most popular sport in the world”

The affirmation comes up often. After football, cricket is said to be the second most popular sport in the world. Difficult to quantify. But with the status of India’s most popular sport and its billion people, cricket certainly has a fan base that is hard to beat. However, this sport is played in a relatively small number of countries. From the Caribbean to Pakistan, via Oceania, parts of the globe invaded by cricket are reshaping the former British Empire. And its establishment was not won in advance. Sébastien Darbon, of the CNRS, sums up: “The British came to India with cricket, football and rugby. Rugby did not take, because with the caste system in India, the physical contact that rugby imposes was disturbing. Unlike cricket, Sixty years after the independence of their country, they were 40,000 Indians to have come to sing their anthem in the Adelaide stadium for the first match of the World Cup in February.

5] It promotes peace in the world

“Cricket diplomacy” is a formula now used every four years, at every World Cup. In February again, it was cricket that enabled India and Pakistan to renew diplomatic relations, six months after having interrupted them because of the conflict in Kashmir. After an India-Pakistan match in the first round of the World Cup, the Indian Prime Minister offered his Pakistani counterpart to meet his Minister of Foreign Affairs. A proposal immediately accepted. “Historically, whenever India and Pakistan have gone through a period of tension in bilateral relations, cricket has come to the rescue,” Boria Majumdar explained in 2009,cricket historian. This was notably the case in 1961 and in 1978 after a diplomatic rupture between the two countries following the partition of the Indies.

6] French cricket is a sport of the future

Well, we are not going to oversold the French cricket team: it is still far from being able to claim a place in the World Cup. But, little by little, the France Cricket federation, which manages everything related to this sport, is capitalizing on its 1,400 licensees and is launching several initiatives to make itself known. By introducing cricket in primary schools in 35 departments already: a device initiated in February 2012 and planned to last until 2021.

The French also have nothing to envy to the English in terms of class and aristocracy: the Thoiry club plays its matches in the gardens of the Château de Thoiry, under the patronage of the Count and Countess of La Panouse. The France team is trying to climb the ranks of World Division 5. It is mainly composed of players of Indian, Pakistani or Sri Lankan origins, and still has a former professional in India, Waseem Bhatti, and a young bat prospect, Zika Ali, 20. Enough to go and defend the title of Olympic vice-champion in 2024.